We have started our journey before 7 years providing only web designing, web development, graphics designing, SEO services. Due to support from our client all over the globe we are expanding our services to iphone development and android application programming.

All of our projects employ a very structured approach to software development, the Advanced Waterfall Methodology. Our software development experts will meet with you to define and document your system requirements in detail prior to beginning the computer programming phase of your project. This ensures that there will be no delays or unexpected expenses once programming has begun. 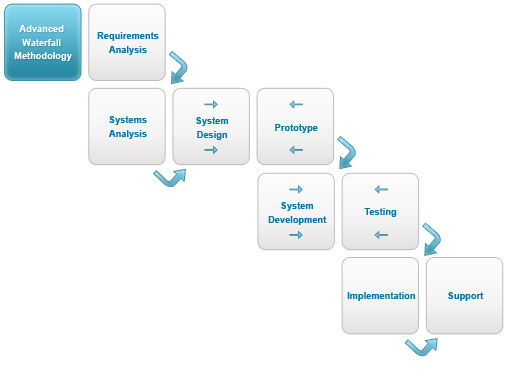 Pithad’s approach to software development has allowed us to successfully deliver custom built solutions to hundreds of customers.

The development process begins with tasks that allow us to design a system that most effectively meets our customer’s functional and budgetary requirements. The deliverable for this phase is the Requirements Document.

Once the design documentation is accepted by the client, software development begins. Development tasks may be assigned to any number of computer programmers, coordinated by a project manager or team leader. Typically, a single developer is assigned a particular operation of the system along with its functionality. For example, if a system were to produce reports, one developer would create all reports. This promotes consistency throughout the entire section. While development is in progress, the programmers test the code they are writing, making corrections as they go, and then move to the next task. When an entire module is complete, the code has already gone through several cycles of developer testing, and it is then passed along for module testing. This testing is typically performed by the team leader.

Once testing is completed by the Pithad team, it is then delivered to you, the customer, so that you can perform your tests on the system. By this time, the majority of run-time and obvious logical errors would have been addressed. The primary goal of this phase is to ensure that the system functions as you expect, and that there were no misunderstandings between the customer, analyst, system designer, and developers.
If the solution was developed to replace an existing system, the two will be run in parallel with duplicate input. It is important in this phase that the data entered into both systems is identical since this allows the customer to compare the output of both systems, such as monthly reports. If the output does not match, it may identify internal processing bugs that need to be corrected before the system goes “live”.
Once the system has passed customer testing, it then goes “live”.

Once delivered, Pithad IT will remedy any defects in existing functionality for a pre-specified period of time.